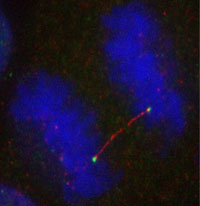 A cell in anaphase with an ultra-fine DNA bridge coated in BLM protein (red). The green foci represent FANCD2. Chromosomes are in blue.

One focus of research in the Molecular Aging team is to elucidate the fundamental basis for genetic disorders in humans that are associated with the premature onset of aging in affected individuals. Several of these disorders are caused by the loss of function of genes required for DNA repair or other aspects of the maintenance of genome stability. These genes include BLM, WRN and RECQ4, all of which encode proteins from the same family of DNA repair proteins, the RecQ helicases. These genes are mutated in the human premature aging diseases; Bloom's syndrome, Werner's syndrome and Rothmund-Thomson syndrome. We combine biochemical analysis of RecQ helicases with molecular/cell biology studies of the effects of loss of function of each of these proteins. Furthermore, we study proteins that regulate the activity of these helicases, such as the Exo1 exonuclease, which plays important role in both DNA mismatch repair and double-stranded DNA break repair. We aim to shed light on how defects in these processes lead both to loss of cell vitality associated with the aging process and to age-related diseases, such as neurodegeneration and cancer. In addition to human cells, we also use model organisms that are more genetically amenable than human cells, including yeast and chicken cells.

We are also interested in other premature aging disorders such as Cockayne syndrome. Lack of the Cockayne syndrome protein leads to defects in DNA repair and to severe neurodegeneration. It is present in the nucleus and also in mitochondria. Aging may be a consequence of lack of energy production because of dysfunction of mitochondria. This hypothesis is being pursued by cellular and biochemical approaches. DNA repair and genomic stability are being studied in mitochondria, and mitochondrial functions are being studied at the cellular level and in cohorts of patients with advanced age or neurodegeneration. We also study the molecular mechanisms underlying mitochondrial-mediated mutagenesis to identify proteins involved in maintaining integrity of the mitochondrial genome. We further study the impact of DNA damage and aging on whole body metabolic changes and how these alterations impact glucose and fatty acid homeostasis.

Finally, we study how cells cope with other common stressful insults such as oxidative stress, heat shock and impaired protein synthesis. We are particularly interested in how these stress stimuli are sensed and signaled within the cells and how exposure to such stresses is related to the aging process.