Glycosylation is an essential cellular process that involves the covalent attachment of glycans (carbohydrates/sugars) to proteins; glycans play important roles in maintaining normal cellular functions and dysregulation of processes related to protein glycosylations are known to cause various diseases, e.g. cancer and developmental disorders. Our group is interested in the biosynthesis, regulation and biochemistry of O-linked glycosylations with a special focus on protein O-mannosylations (see our OA article in Cell). We use a combination of methods, including advanced mass spectrometry, to study structures, map site-specific locations and quantify changes of protein O-mannosylations on a proteome-wide scale. In addition, we use CRISPR/Cas9 gene editing for KO/KI of glycogenes in our efforts to study and understand enzymatic pathways involved in protein O-mannosylation. 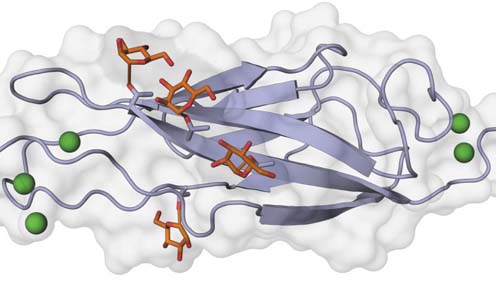 O-mannosylation was for a long time believed to be a rare type of protein modification in mammals. Until recently, α-dystroglycan (αDG), a component of the dystrophin complex, remained the only well-characterized protein with respect to O-mannosylation sites and structures. Building on the SimpleCell technology developed at Copenhagen Center for Glycomics (CCG), we established a glycoproteomic workflow for studying protein O-mannosylations on a proteome-wide scale. This approach allowed us to greatly expand the human O-mannose glycoproteome and led to the discovery of cadherins and protocadherins as major carriers of O-mannosylations. Using the SimpleCell technology, we recently uncovered that O-mannosylation of the cadherin superfamily is not mediated by the classical POMT1/POMT2 enzymes and identified the glycosyltransferase family (GT105), composed of TMTC1-4, that initiates the cadherin-specific O-mannosylation. Currently, we are characterizing the TMTC1-4 enzyme family, exploring the substrate specificities/interactomes of individual TMTC family members and studying the disease-causing mutations in this enzyme family. Our ambitions are to gain further understanding on cellular processes related to the function of cadherin-specific O-mannosylation in health and disease (e.g. Cobblestone lissencephaly).

In addition to the cadherin superfamily, we have identified plexins as a major class of cell-surface O-mannosylated proteins. The IPT/TIG domains of plexins are frequently O-mannosylated on specific β-strands but, intriguingly, this O-mannosylation doesn’t seem to be mediated by POMT1/POMT2 or the TMTC1-4 family. Our results thus indicate that other, as yet unknown glycosyltransferases are present in mammalian systems and are responsible for directing O-mannosylation specifically to proteins with IPT/TIG folds. Using the SimpleCell platform, we are currently screening candidate genes to test this hypothesis and to identify the novel glycosyltransferase enzymes responsible for O-mannosylation in mammalian cells.

O-linked mannose glycosylation on nucleocytoplasmic and secreted proteins in yeast and metazoans. Phosphorylation and O-GlcNAcylation work together and orchestrate signaling processes in metazoans; yeast appears to have a similar system (based on O-linked mannose) operating in nucleocytoplasmic compartments; however, the functions and enzyme(s) in yeast remain unknown.