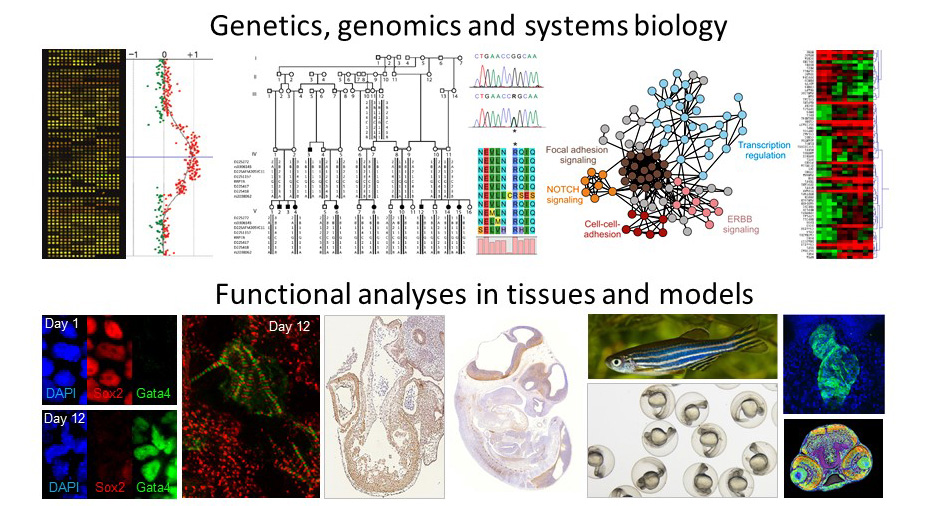 Congenital heart disease (CHD) is gross structural abnormalities of the heart and intrathoratic vessels. This is the most common group of inborn malformations, with an incidence of almost 1% in the population. The etiology of CHD is complex but with a significant genetic component. Large families with CHD are very rare and CHD is a very heterogeneous disorder, thus it is difficult to identify the causative variants in CHD patients and the genetics and pathophysiology of CHD is generally not well understood.

Increased knowledge of disease genes, variants and pathophysiological mechanisms associated with cardiac development and CHD is necessary for improving prevention of CHD as well as early diagnosis, prediction and support of CHD patients suffering from co-morbidities. It may also provide a basis for development of new drug therapies e.g. for minor cardiac defects like small atrial- and ventricular defects or prevention, early diagnosis or treatment of late-onset aortic valve disease. Furthermore, identifying and understanding molecular mechanisms in human cardiac development, especially the subset of genes and molecular networks, which regulate cardiomyogenesis is likely to have an impact on the development of therapeutic means for regeneration of cardiomyocytes in myocardial infarction and congestive heart failure.

Heart development is a complex process, which involves establishment of a primitive heart tube, looping of the heart tube, followed by chamber formation, chamber septation and development of the cardiac valves and outflow tract (figure 1).

Development of the heart is coordinated by a significant number of cellular signaling networks like the Hedgehog, WNT, TGF-beta signaling pathways. Furthermore, many known human CHD disease genes are involved in different aspects of cellular signaling (figure 2). Thus, we are also interested in exploring the mechanisms and organelles which regulate signaling transduction during heart development and cardiomyogenesis, for example the primary cilium.

We explore different genomic strategies for identification of genes, genomic regulatory regions and molecular networks involved in cardiac development and disease. To this end we are currently investigating families where CHD is found in several family members. We investigate the function of the candidate genes or signaling pathways by expression analysis in embryonic tissues and functional assays in cell models and zebrafish.

In collaboration with the Cilia Group at Department of Biology, UCPH we are investigating how the primary cilium is coordinating signaling pathways during embryonic development.