We have shown how small pulsed electric fields identical to those measured outside excitable tissue can cause a paracrine signaling from endothelial cells of growth factors and interleukins to surrounding tissues. In the brain these pulses result in activation of neural tissues and cause an enhanced neuroplasticity. In animal models it results in an enhanced angiogenesis induced by VEGFA. 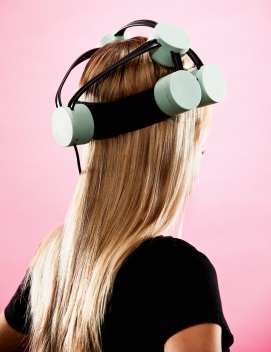 The research has resulted in the construction of helmet that can relieve patients of treatment resistant depressions. This treatment concept has obtained EU approval for the indication “refractory depressions” and is presently used at 6 psychiatric hospital centers in Denmark.  Patents have been issued in the US and EU.

New projects:
We are currently developing a model to activate an essential protein outside microglia TREM2. TREM2 is a transmembrane receptor and is found in various tissue macrophages. It has been suggested that TREM2 might protect against neuro degeneration by promoting phagocytosis and the clearance of apoptotic neurons while controlling inflammation. (Colonna M.,  Nature Reviews Neuroscience 17, 201–207, 2016). TREM2 recruits the protein tyrosine kinase SYK (Src family - se below) and initiates a cascade of signaling events, including protein tyrosine phosphorylation, phosphoinositide 3-kinase (PI3K) activation, Ca2+ mobilization and mitogen-activated protein kinase (MAPK) activation. Thus the hypothesis is that pulsed electric fields can activate SYK recruited by TERM2 and initiate clearance of apoptotic neurons and diminish neuro inflammation. TREMT2 is expressed in a human THP-1 cell line which can be used as a model for interactions between TREM2, SYK and pulsed electric fields. 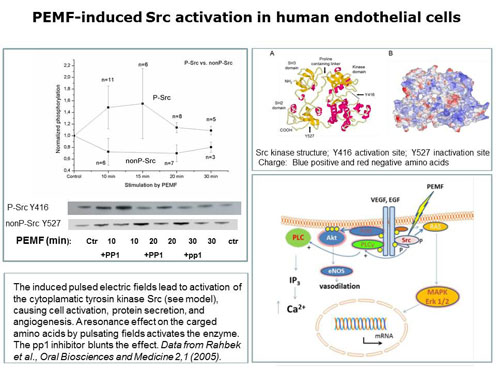 Human endothelial cells becomes activated by pulsed electromagnetic fields (PEMF). The western blotting (upper left) shows the activation of the Src kinase on its activation site and as well a diminished activity on its inactivation site. This results in activation and increased signaling. The Src kinase is the cellular sensor for PEMF .