The incretin hormone glucagon-like peptide-1 (GLP-1) is produced and secreted in the intestine upon food intake. It is integral to glucose homeostasis in particular because of its known facilitation of insulin release from pancreas. GLP-1 is produced by l-cells primarily in the distal parts of the intestine, but it can also activate a Gs-coupled GLP-1 receptor (GLP-1R) resulting in proliferation of human coronary artery endothelial cells as well as α-cells in pancreas (Egholm et al., 2016). GLP-1 administration in patients with Type 2 diabetes improves endothelial function by attenuating hyperglycemia-induced oxidative stress.

We are currently investigating the acute effects of GLP-on the vessel wall. We characterized (Egholm et al., 2016) how GLP-1 interacts with vascular endothelial growth factor-A (VEGFA) induced endothelium-dependent signaling and vasodilation.  Both proteins (GLP-1 and VEGFA) share common pathways and most importantly interacts with cytoplasmatic Src kinase that controls a wide variety of signaling pathways leading to control of vessel tone through endothelial cell signaling. Interestingly, we found that GLP-1 could abolish the VEGFA-induced relaxation and we identified the signaling pathways, activated by GLP-1, responsible for this effect.

New projects:
These findings leads us to hypothesize that the interactions of hormones and interleukins on endothelial cells in the vessel wall, are also under control of GLP-1 that peaks shortly after meal intake. These interactions might also control vessel permeability for nutrients in some segments of the blood circulation, since vessel wall integrity is known to by dependent on Src activation. Our aim is to further characterize the interactions between GLP-1 and hormones and interleukins in the blood to gain insight into the dynamics of vessel integrity and permeability. 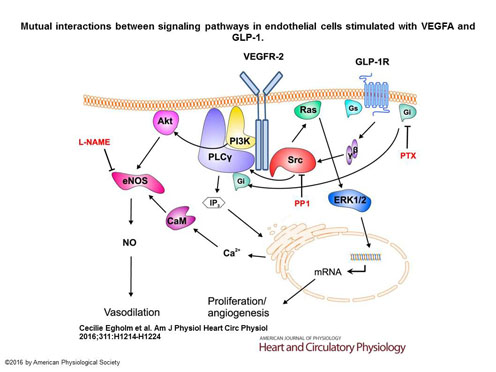 Model describing how GLP1R activates the Src protein and the G protein( Giα). GLP-1 preincubation causes an extensive incorporation of GTP into Gs subunits causing less Giα activation by the GLP-1R. Since Giα is essential for PLCγ activation and Ca2+ signaling, preincubation with GLP-1 thus causes diminished Ca2+ signaling and reduced NO synthesis. The net result is thus a reduced VEGFA-induced vasodilation since NO synthesis is reduced due to the GLP-1 signaling. Src activation by VEGFA and GLP-1 maintains vessel wall permeability and integrity.